The boy in love without no fear like me some time ago
Like a hero bold through frost and cold to see my love I’d go
But the moon shone bright to give me light along my dreary way,
Until I arrived at my true love’s gate where all my fancy lay.

When I arrive at my true love’s gate, my step being soft and low,
She will arise and let me in, so softly I will go,
Saying, “Will you come to my father’s house?” “No dear, but come to your own,
Come with me, love, to the Parson’s and there we’ll be made one.”

“Oh no, oh no kind sir,” said she, “for prudence would not agree,”
“Well, then, sit down along by my side, for I must talk with thee,
For seven long years I have courted you against your parents’ will,
I was always resolved you would be my bride, but now, pretty girl, farewell.

“My ship lies in the harbor all ready to set sail,
And if the wind is from the East we’ll have a favoring gale,
And when I reach Columbia’s shore it is often I will say,
May the Lord above protect my love where all my fancy lay.

We return again this month to another fine Irish song from the repertoire of Minnesota singer Michael C. Dean. Irish song scholar John Moulden has traced this song, well known today in Ireland as “When a Man’s in Love He Feels No Cold,” back to its original composer: County Antrim schoolmaster Hugh McWilliams. McWilliams included “A Man in Love” in his book Poems and Songs on Various Subjects which was published in 1831 in Antrim.
The song entered folk tradition where, over the next hundred years, it gained some words, lost others and was set to several different melodies. Dean’s “Minnesota version” provides evidence of the furthest distance the song traveled from its source.

Since Dean left us only his text, I based the above melody on the melodies used for two other transatlantic versions collected in Marystown, Newfoundland by Maud Karpeles in 1930 and printed in Folk Songs from Newfoundland.

I left Balamonoth a long way behind me,
To better my fortune I crossed the deep sea,
But I’m sadly alone, not a creature to mind me,
And, faith, I’m as wretched as wretched can be;
In truth, I think I’m near broken hearted.
To country and home I must return back again,
For I’ve never been happy at all since I parted
From sweet Balamonoth and Nora McShane.

I sigh for the turf fire so cheerfully burning,
Where barefooted I trudged it from toiling afar,
And tossed in the light the thirteen I’d been earning,
And whistled the anthems of Erin go Bragh;
But now far away from my fireside I’m parted,
Away back in dear America over the main,
And may God speed the ship that is sailing tomorrow,
Back to dear old Erin and Nora McShane.

There is something so dear in the cot I was born in,
Though the walls are but mud and the roof is but thatch,
How familiar the grunt of the pigs in the morning,
What pleasure in lifting that auld rusty latch;
It’s true I’d no money, but then I’d no sorrow,
My pockets were light and my head had no pain,
But if I’m living when the sun shines tomorrow,
I’ll go back to ould Erin and Nora McShane.

Several years ago, Maeve O’Mara and Liam O’Neill, proprietors of Irish on Grand, gave me a copy of a handwritten notebook of old song lyrics that someone from Hugo, Minnesota dropped off at the store. The notebook was made by Sylvester Johnson (whose parents immigrated from Cork) in the late 1800’s. The Johnson Manuscript is a fascinating collection of 27 songs including many 19th century sentimental Irish songs from both sides of Atlantic. There are at least five songs in the manuscript that also appear in Michael Dean’s Flying Cloud including “The Lament of the Irish Emigrant” and “Norah McShane.”

The text of “Norah McShane” was written by English poet Eliza Cook in 1838 when she was 20 years old. Cook was an outspoken advocate for women’s rights and a hero to many working class people in England and America. Several of her poems were widely known and set to music. I have yet to find a source for a melody in any North American source from oral tradition. However, a parody of “Norah McShane” called “Lake Chemo” written by James Wilton Rowe in the 1870s was collected in the woods of Maine by Phillips Barry. Rowe’s melody is a variant of the classic air Thomas Moore used for his “Believe Me If All Those Endearing Young Charms.” The Dean and Johnson versions suggest a longer phrase length than the Rowe parody so I blended Rowe’s melody with other elements of the “Endearing Young Charms” melody to get the melody above. The text is as it appears in Dean. 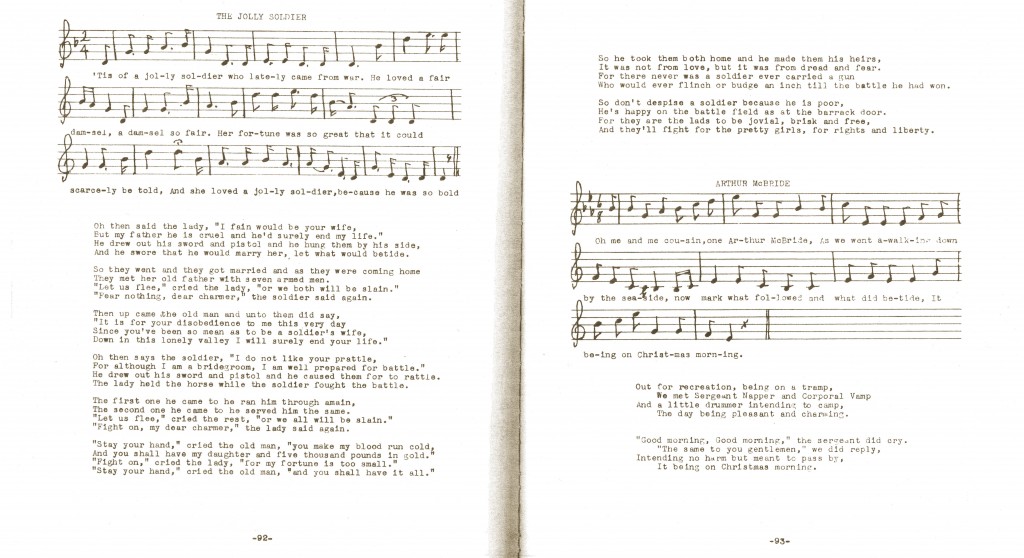